This is How Much the Best-selling Authors Earn Per WORD

This is How Much the Best-selling Authors Earn Per WORD

Blog
Reading is a popular pastime, but where in the world has the best libraries and bookstores? The Knowledge Academy sought to find out.
Blog
Ever wondered which capital cities are least known around the world? TKA investigates the amount of searches for the capital cities of the world’s wealthiest nations.
Blog
After a punishing year for universities, a report from the University and College Admissions Service (UCAS) could act as a light at the end of the tunnel for the world of academia.
Blog
You can probably imagine how rich your favourite authors are, but did you ever wonder how much the best-selling authors earn per page, or even word? Our latest research reveals all! 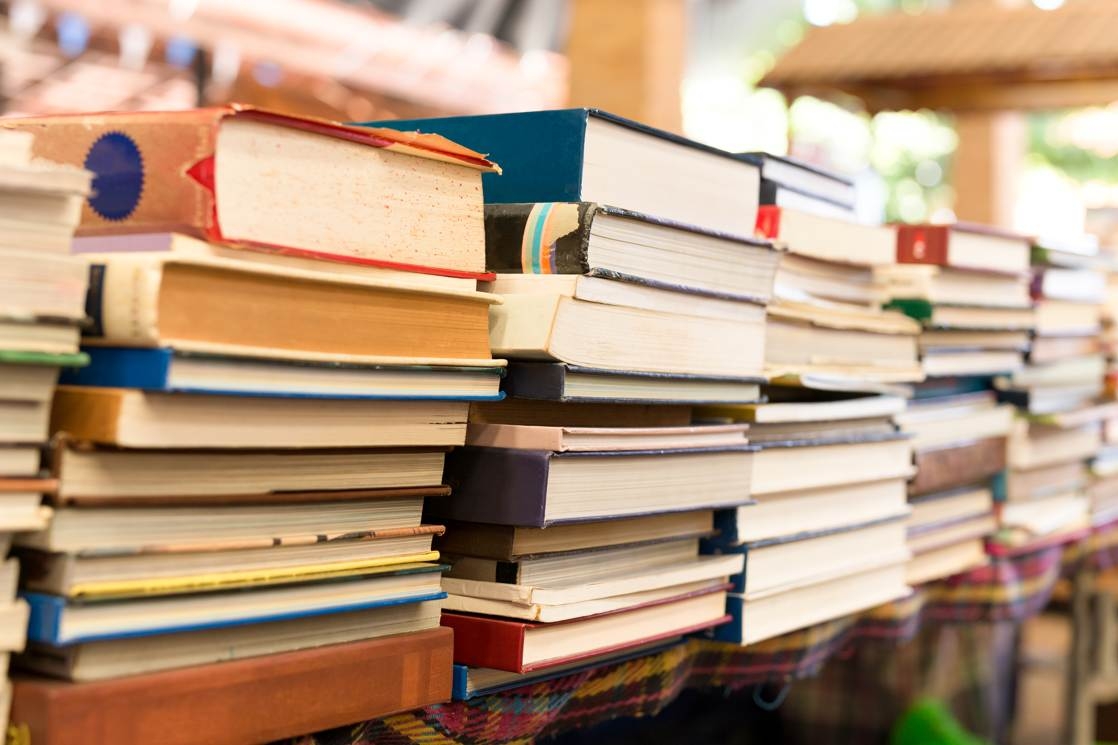 Whether it’s a classic novel or recent release, we all have our favourite books to read. But do you realise just how much money you may be gifting the authors by buying one of their books? If it’s one of the best-selling authors of all time, you could be making them billionaires!

Interested in discovering just how much the biggest authors earn, The Knowledge Academy set to find out.

We firstly collated a list of the best-selling novels of all time. Assuming authors receive 10% of the price of the novel as royalties, we calculated how much the author would get per book sold. Taking the approximate number sold worldwide, we then calculated how much they have earned to date – we’ve broken these figures down into earnings per page and even per word!

Which are the best-selling books of all time?

Considering living authors only, we narrowed down the top 20 selling books as:

But as pricing and page numbers differ from book to book, the highest earning authors per page and word changes slightly.

The following books made the richest authors: 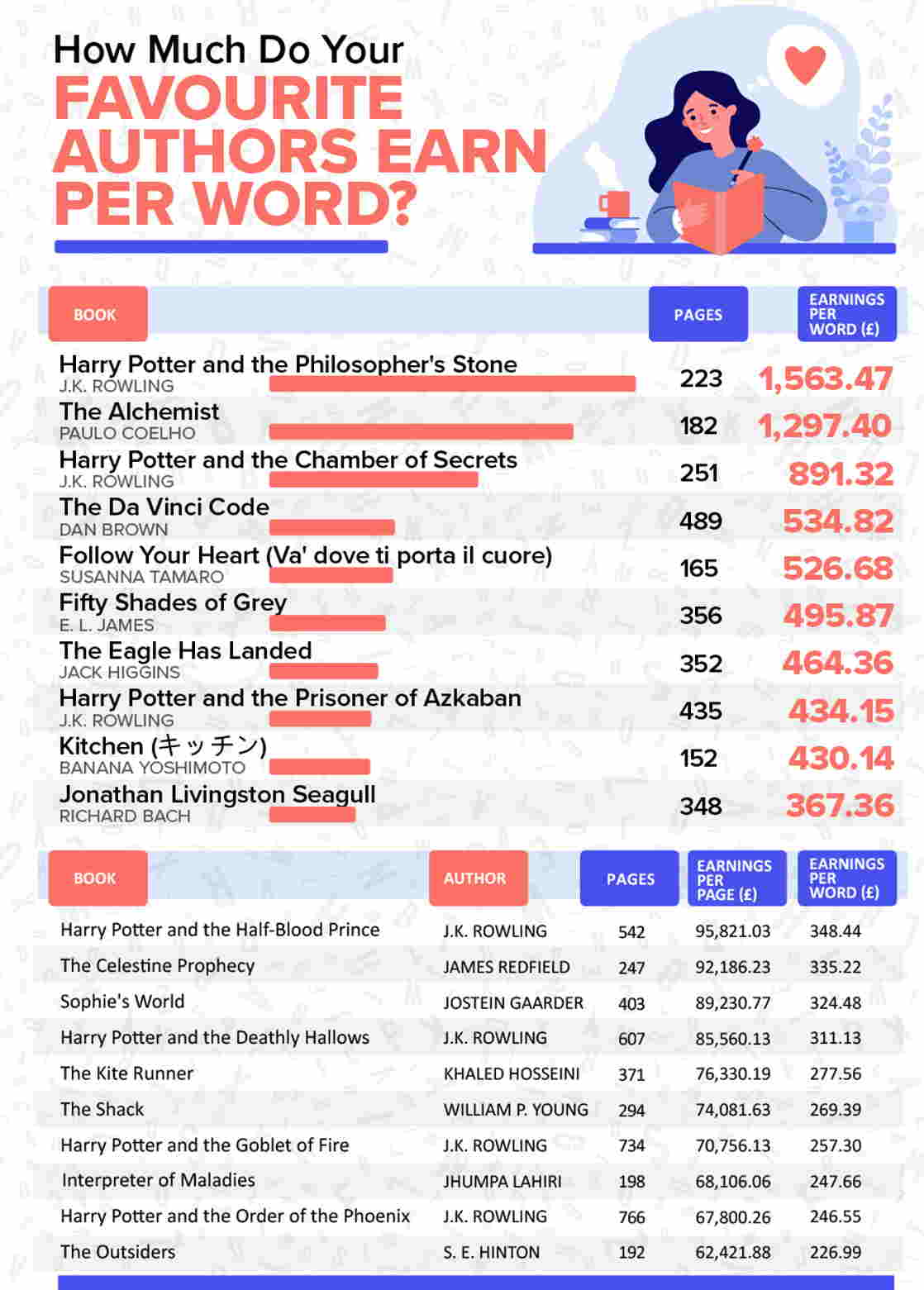 Perhaps unsurprisingly, in first place is Harry Potter and the Philosopher’s Stone. But what is surprising is that the cult best-seller earns J. K. Rowling a staggering £429,955.16 per page, and £1,563.47 per word - that’s more than many Brits earn in one month!

The second highest earning book is The Alchemist by Paulo Coelho. The beautifully written allegory novel spoke true to many people with a staggering 65 million copies bought, which means the book earns Coelho a whopping £356,785.71 per page, and £1,297.40 per word.

Harry Potter and the Chamber of Secrets makes it to third place, adding onto J. K. Rowling’s impressive haul and righteous title as one of the best female authors of all time. The sequel to Harry, Ron and Hermoine’s antics has sold so many copies that it generates £245,111.55 per page and £891.32 for every word written.

Another renowned book series is Robert Langdon’s adventures. It seems sequels are almost as lucrative as original stories, with the second book in the Langdon series, The Da Vinci Code, claiming fourth place. Dan Brown earns an impressive £147,075.66 per page and £534.82 for every word read – maybe it’s time to learn some new skills and try our hand at book writing!

Other iconic books to make the top ten highest earning include:

How much do the best-selling authors earn in the US? 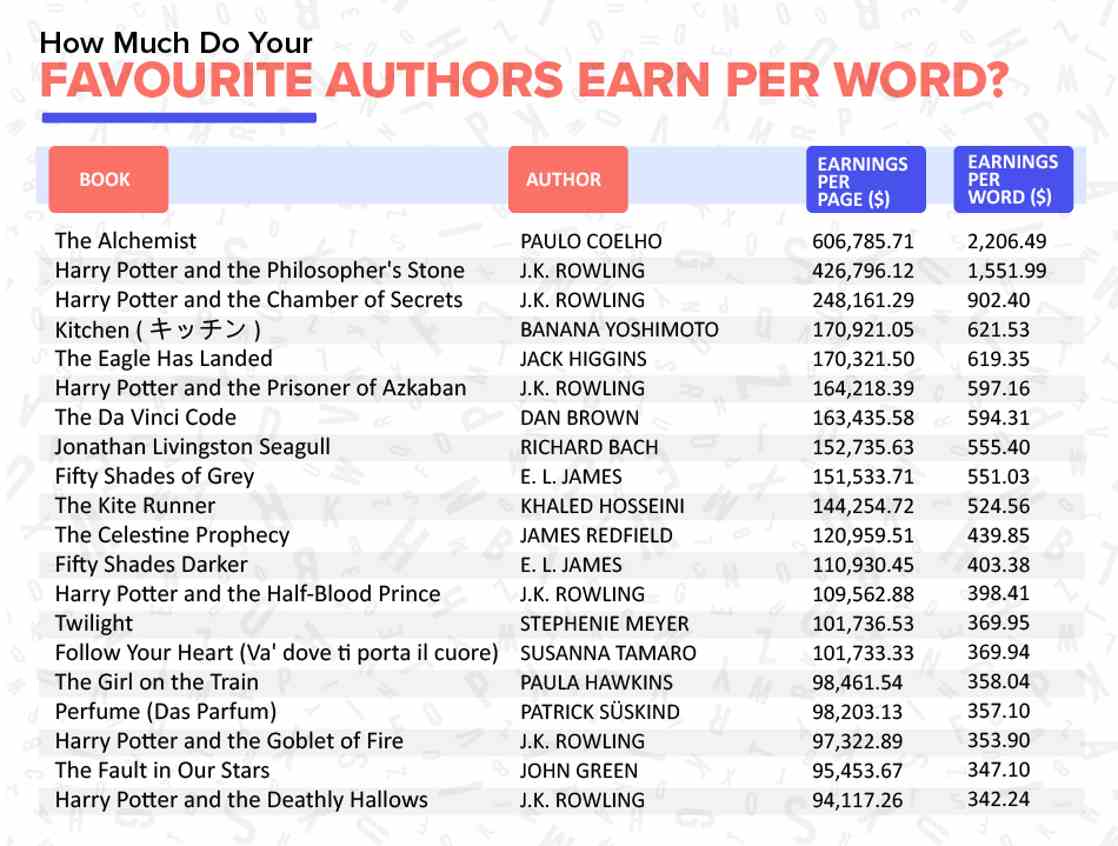 We were also interested to see how much our favourite authors earn per page and per word across the pond in America, too. It comes as no surprise that the Harry Potter books are popular globally, with six of J.K. Rowling's books featuring in the top 20!

While many of the famous authors are also high earners in America, some new entries can be seen. The novel inspiring the famous Twilight movies that catapulted Robert Pattinson and Kristen Stewart to stardom enters at 14th place. The first book in the series earns Stephenie Meyer $101,736.53 per page and $369.94 per word!

Additionally, The Fault in Our Stars claims 19th place, with the heartbreaking tearjerker earning author John Green $347.10 per word. Psychological thriller The Girl on the Train also features, earning Paula Hawkins $358.04 per word to date!

Regardless of genre, finding the hook to create a great novel may just reward you nicely for it. Now might be time to consider enrolling on that creative writing course you keep putting off...

The collated list of best-selling novels of all time were considered from living authors only. The Knowledge Academy researched and found that authors receive an average of 10% of the price of a novel as royalties and used this to calculate earnings.