The best capital cities in the world for book lovers

The best capital cities in the world for book lovers

Blog
Reading is a popular pastime, but where in the world has the best libraries and bookstores? The Knowledge Academy sought to find out.
Blog
Ever wondered which capital cities are least known around the world? TKA investigates the amount of searches for the capital cities of the world’s wealthiest nations.
Blog
After a punishing year for universities, a report from the University and College Admissions Service (UCAS) could act as a light at the end of the tunnel for the world of academia.
Blog
You can probably imagine how rich your favourite authors are, but did you ever wonder how much the best-selling authors earn per page, or even word? Our latest research reveals all! 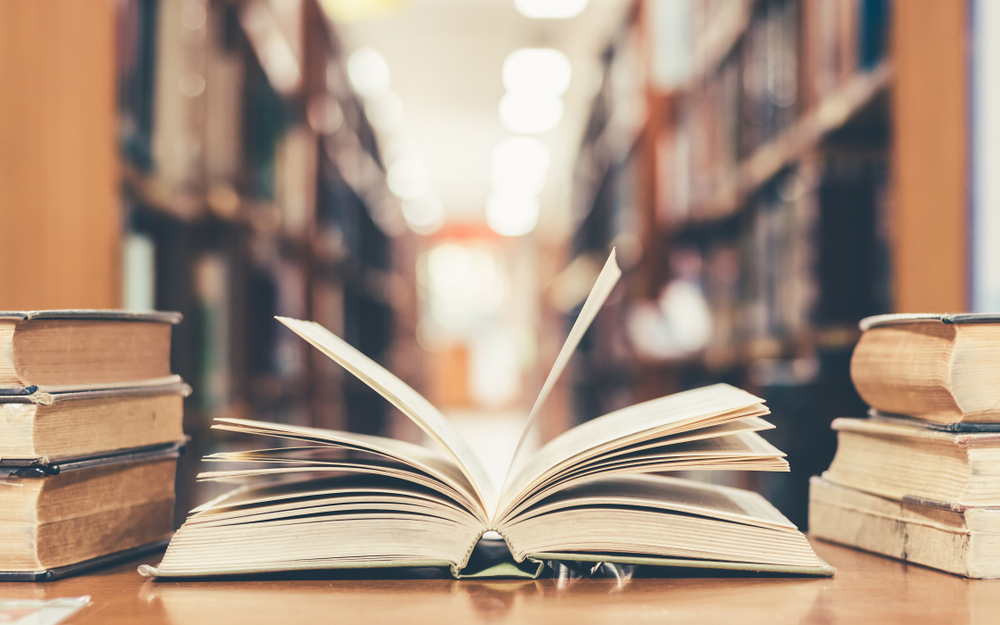 Despite the domination of the digital age, our love of physical books refuses to diminish. We’re still a species that loves curling up with a good novel, that wants to learn new skills from a book and even turn pages to help us pass an academic course. By that definition, our world is still full of bookworms.

But where in the world do all the bookworms live? Fascinated by the idea, The Knowledge Academy conducted an original study to find out.

To determine which capital cities in the world are the best for book lovers, we gathered data on the population of each major city and how many bookstores and libraries each one had. We then compared these numbers to the relative population to give a ranking out of ten.

We also wanted to find out which are the best European cities for bookworms, so we created a separate ranking for this. For Europe, after collecting the same data as above, we gathered data on average spending on newspapers, books and stationery to create an expenditure score.

We can now reveal which cities are the best for bookworms.

The top 10 capital cities for bookworms 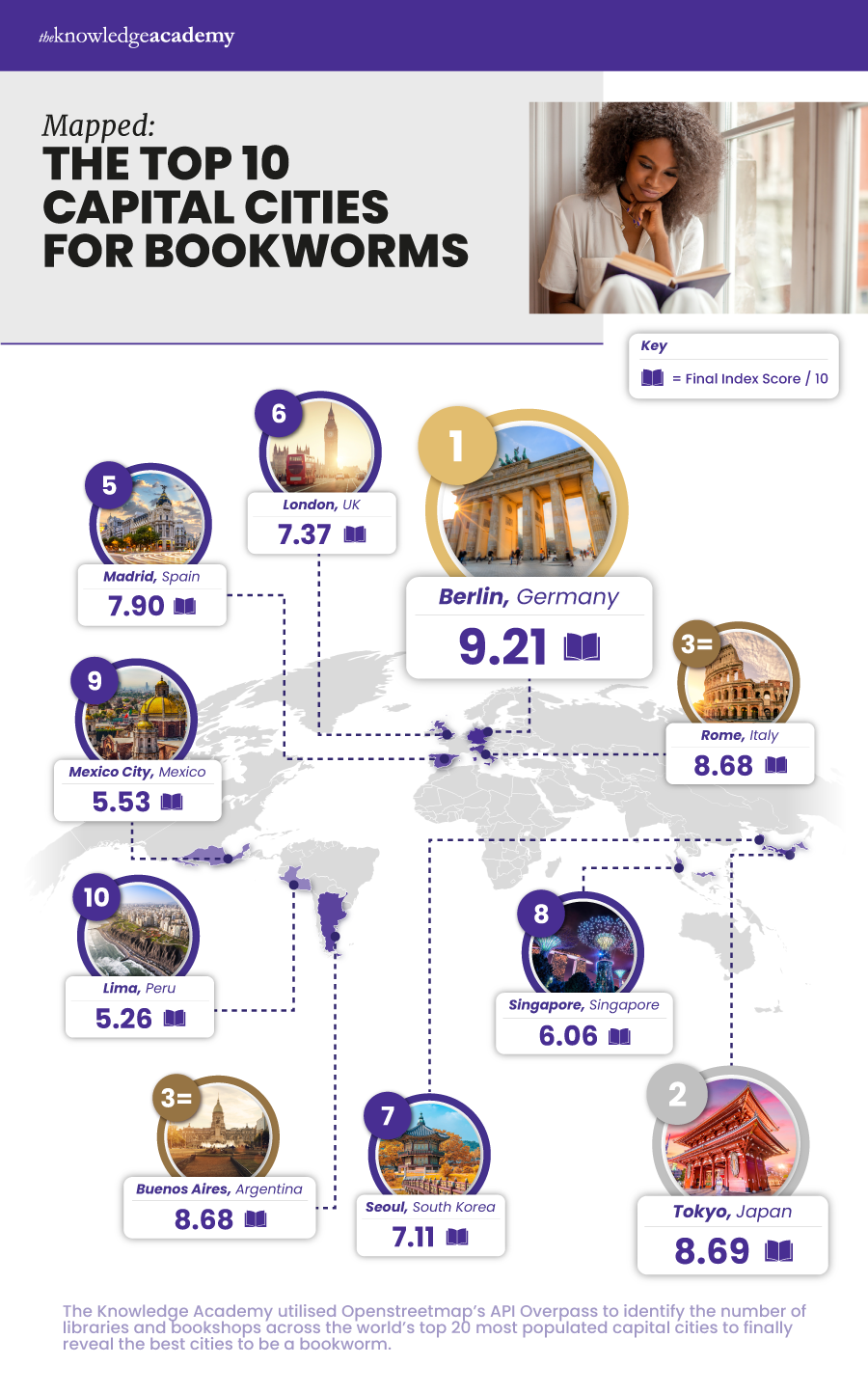 1. Berlin: the best capital city in the world for bookworms

Berlin is the world’s number one capital city for book lovers. Scoring 9.21 out of 10 overall, the German capital also scored highest for bookshops (10 out of 10) with a high library score (8.42 out of 10). This is an unsurprising revelation in some ways, as Berlin has produced some of the best German writers, including the groundbreaking playwright, Bertolt Brecht, and has inspired the works of other famous creatives, such as David Bowie.

Boasting high library and bookshop scores (8.95 and 8.42, respectively), Tokyo is the second-best city for bookworms. Scoring 8.69 overall, the Japanese capital is known for its quirky bookshop culture. Rarely is a bookstore just a bookstore in Japan, but also home to art displays, cultural exhibitions and cafes and bars to boot.

Sharing third place with overall scores of 8.68 out of 10 are Buenos Aires and Rome. The Argentinian capital scores second-highest for bookshops (9.47 out of 10), whilst Italy’s ‘Eternal City’ claims second-best library scores overall (9.47 out of 10).

Ateneo Grand Splendid in Buenos Aires has been recognised as the world’s most beautiful bookstore, housed in a preserved antique theatre. But Rome’s Museo del Louvre drives high competition with its unique collection of antiques and collectable books among its vast vintage archives.

Scoring 7.9 out of 10 overall, Spain’s capital city is the fifth-best place for book lovers. Alongside its high bookshop score (8.95), Madrid also offers book lovers its annual Feria del Libro book fair. Visitors flock from around the world to enjoy over 300 activities, including readings, workshops and book signings.

6. London: Literary delights at every corner

From Charles Dickens to J K Rowling, and from Shakespeare’s Globe open-air theatre to the Sherlock Holmes Museum, London is a literary haven for book lovers. In sixth place, England’s capital city has great library and bookshop scores (both 7.37) and a high overall score of 7.37 out of 10. The London literature scene serves enough inspiration to take up creative writing for all.

In seventh place and scoring 7.11 out of 10 overall, the capital of South Korea has the highest library score (10 out of 10). Despite being the third most technologically advanced country, South Korean bookshop owners have found creative ways to keep people enthralled by reading. In Seoul, Instagram-famous stores such as Arc.N.Book welcome book lovers through a Harry Potter-esq tunnel entrance, complete with red telephone booths and park benches inside.

Scoring 6.06 overall, Singapore is the eighth-best capital city for book lovers. Although you wouldn’t necessarily associate Singapore with literature, it's a highly accommodating city for bookworms. From the Moon Library in Chinatown (expect leather-bound classics and great coffee) to Singapore’s largest bookshop, Kinokuniya Orchard Road, it’s surprising that the city only scores 5.79 for libraries and 6.32 for bookshops.

Rounding off the top 10 capital cities for bookworms is the capital of Peru. Lima scores 5.26 out of 10 overall. Despite a low library score (3.68), Lima has a higher bookshop score than Mexico City, Singapore and Seoul (6.84). Book lovers can seek comfort (and food) in the likes of the Casatomada Library Café or the quaint Librería El Virrey bookstore in Miraflores.

The top 10 European cities for bookworms

The best European city for bookworms is Zürich. The Swiss city scored an impressive 9.37 out of 10, with even higher ratings for libraries (9.68) and a high bookshop score (9.06). Book lovers can revel in Zürich’s many independent bookshops, from the historic Buchhandlung Beer (dating back to 1832) to the English collection at Pile of Books. Contrary to popular belief, Bern is actually Switzerland’s capital city, not Zürich.

Close behind Zürich in second place is Luxembourg, scoring 9.3 out of 10. You’ll find some highly dedicated literary lovers splashing out on newspapers, books, and stationery in the capital city here (expenditure score: 8.84). Luxembourg is a brilliant destination for book lovers from around the world, offering many multilingual libraries throughout the city.

The third-best European city for bookworms is Bratislava—Slovakia’s capital—scoring 8.38 out of 10 overall. Bratislava has the highest library score (10 out of 10) and the second-highest bookshop score (9.37) out of all European cities. Bratislava’s historical University Library Building is a fascinating place to visit and is Slovakia’s oldest library.

Iceland’s capital, Reykjavik, is the fourth-best city for book lovers with an overall score of 8.2 out of 10. Residents in the capital city love to spend on literary goods, scoring the highest out of all European cities for buying newspapers, books and stationery (9.61).  Iceland is famous for its love of books, with more writers and readers per head than anywhere else in the world, where one in 10 people will publish a book.

In fifth place, the modest capital city of Moldova, Chisinau, scores 7.97 out of 10 overall. With good scores for bookshops (8.75) and libraries (7.18), Chisinau is a promising location for bookworms. Cărturești Books is one of the best places to visit, with plenty of books in Romanian, English, French and Russian to flick through. Visitors are encouraged not only to read but also to play board games or cards and even partake in a sip of wine.

Austria’s stunning capital, Vienna, claims sixth place with an overall score of 7.48 out of 10. With plenty of literary shopping opportunities (8.07 for expenditure), Vienna is also famous for the birth of coffee house literature. Viennese coffee house literature peaked between the end of the 19th and the beginning of the 20th century, but the draw of coffee shops for authors and writers still remains in Vienna today.

Home of the annual Helsinki Book Fair, Finland’s capital is the seventh-best city for book lovers. Scoring 7.4 out of 10 overall, residents of Helsinki love to shop for book-related items (8.46) and its libraries score well (7.81). Not all libraries are created equal here, however, with the Oodi Central Library dedicating just a third of its space to books. The remainder of the building incorporates a movie theatre, recording studio, restaurant and much more to draw in bookworms and culture lovers alike.

Paris is the best European city for bookshops, scoring 10 out of 10. The French capital is the eighth-best city for bookworms and scores 7.13 overall. Paris is of course famous for its writers from the 1920s, including F. Scott Fitzgerald and E.E. Cummings and has inspired movies such as the 2011 hit Midnight in Paris to celebrate these literary figures.

9. Warsaw: the highest number of libraries

Scoring second-highest for libraries (9.06), Warsaw slots into ninth place with an overall score of 6.49 out of 10. Perhaps one of the most unique library designs is the Bookworm Cabin—a miniature library nestled in the woods just outside of Warsaw. But, staying within the city itself you’re not short of libraries to visit. In fact, Warsaw has the highest number of libraries per capita in the world. How’s that for choice?

10. Amsterdam: book events for all to enjoy

Concluding the top 10 European capital cities for book lovers is Amsterdam. The vibrant Dutch capital claims 10th place with an overall score of 6.21 out of 10. Amsterdam has a surprisingly low score for libraries (3.43) but is balanced by good bookshop (7.5) and expenditure (7.69) scores. The city has plenty to offer bookworms, however, from market stalls brimming with paperbacks to festivals and storytelling events.

*Note: for Brazil, its capital Brasilia was changed to São Paulo due to it being a denser area, more akin to a true capital. The same was done for Switzerland (Bern to Zürich).