School of Life: Are University Degrees Still Worth It?

Blog
Knowing whether to opt for in-house or external training can be a tough decision to make. We have outlined the advantages and disadvantages.
Blog
With current events forcing people to stay indoors and to distance themselves socially, we have lots of extra time to fill, so why not use it to learn a valuable skill whilst at home?
Blog
We sought to find out which tech and science degrees are the most sought after by women in the UK, looking at figures from HESA (Higher Education Statistics Agency).
Blog 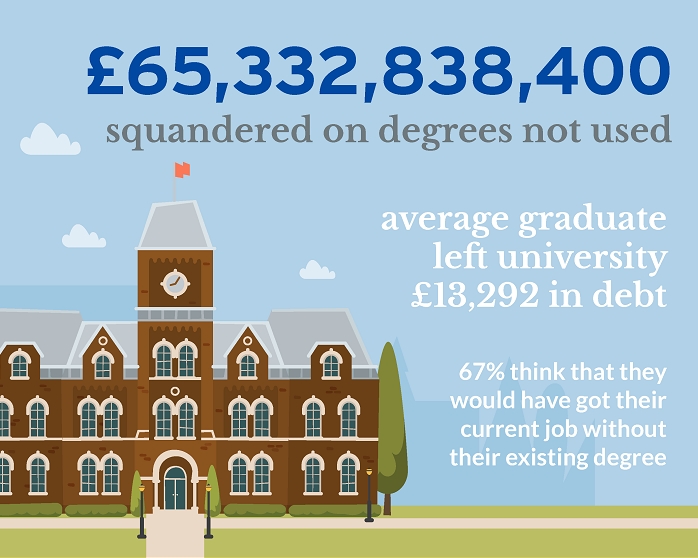 The Knowledge Academy recently surveyed 2000 university graduates across the UK about their current jobs, the value of their degree and their thoughts on university. The results were surprising and illuminating.

Our survey revealed that 64% of graduates feel their degree is not relevant to their current job, and that the average graduate leaves university £13,292 in debt. If we times these findings by the number of graduates in Britain (12 million according to the Office for National Statistics), that’s an estimated £65 billion being wasted on unused degrees.

Furthermore, the majority (34.97%) of people thought they ‘definitely’ could have got their current job without their degree. A similarly large number (25.65%) thought that they could have gotten their jobs, but it may have been a little harder to do so.

We also found that the skills learned during university study are being used little in the workplace. 34.36% thought the content of their degree was irrelevant to their current job, and over 38% had only used their degree in their career ‘once or twice’. Many people are ambivalent about the effects of their degree – over a third thought it made it ‘neither harder nor easier’ to get a job.

Would an apprenticeship have been preferable? The vast majority – over 60% - said ‘no’, but almost 38% said they either ‘often’ or ‘on occasion’ wished they had studied for one instead of a degree.

On the flipside, when asked if they would have been better off working their way up in a job without getting a degree, 43% disagreed. This suggests that the problem may be what people choose to study, as opposed to the nature of the degree in itself. 52.75% also did not agree with the idea that they should have gone straight to the workplace after school rather than getting their degree.

In addition, it’s not all doom and graduate gloom. 51.4% said going to university ‘definitely’ made their life better, and 52.05% said they’d had a better life experience from going to university. 54.05% agreed that it made them ‘much more confident’.

University still has its place, it seems. However, for many, university’s function has been as a life-enhancer and a connection builder rather than anything career specific. We don’t know why people aren’t using their degrees; maybe there aren’t enough jobs available in their chosen field of study, or maybe degrees do not adequately prepare students for what employers are looking for.

Whatever the reason, with fees continuing to rise, it may be time to consider options other than university, such as going straight into the workplace, or taking a different education route such as an apprenticeship, or enrolling onto training courses suited for your line of work.

What do you think about our findings? Do you agree?