We may not have the course you’re looking for. If you enquire or give us a call on +44 1344 203999 and speak to our training experts, we may still be able to help with your training requirements.

PRINCE2® has an extensive history dating back to 1975 when it was formerly known as PROMPT II (Project Resource Organisation Management Planning Techniques). The original framework, PROMPT II, was established by Simpact Systems Ltd and was adopted by the UK Government’s Central Computer and Telecommunication Agency (CCTA) in 1989. In April 1989, the CCTA changed the name to PRINCE, originally an acronym for PROMPT II IN the CCTA Environment, and utilised the framework as an IT standard for project management. Civil Servants then decided to change the name of the framework to the PRINCE acronym that still stands to this day - PRojects IN Controlled Environments, however, the framework was scarcely utilised due to its rigidness and lack of tailorable attributes for small projects.

In 1996, after numerous consultations with project management experts and 150 European organisations, PRINCE2® was established as a best practice framework, and an updated, more versatile framework compared to the previous edition. 2009 saw a major revision to the PRINCE2® methodology - where the seven central principles were established. In 2013, ownership was transferred to AXELOS Ltd from the HM Cabinet.

AXELOS has recently unveiled the new PRINCE2® 2017 Update. At the beginning of 2017, it was decided that the PRINCE2® syllabus would undergo a revision due to feedback from world-leading PRINCE2® Practitioners, who advised that a greater emphasis was required on the link between the themes and guidance, and the application of the framework to real-life business scenarios. The same principles, processes, and themes still exist, however, changes have been applied to the arrangement of the PRINCE2® exams and teaching methods.

Why was PRINCE2® Developed?

PRINCE2® was originally designed to help the public sector, in particular, the central Government, to follow a flexible and consistent framework to promote the completion of projects within a pre-set time, budget, and scope, whilst ensuring quality.

When was PRINCE2® Established?

The PROMPT II methodology evolved in 1989, to become what is now referred to as PRINCE. PRINCE was a very rigid and IT-focused framework that was not suitable for smaller-sized projects, hence the PRINCE2® framework was established in 1996 - providing an updated and more malleable framework that could be tailored to businesses spanning across various industries.

PRINCE2® ownership is as follows: 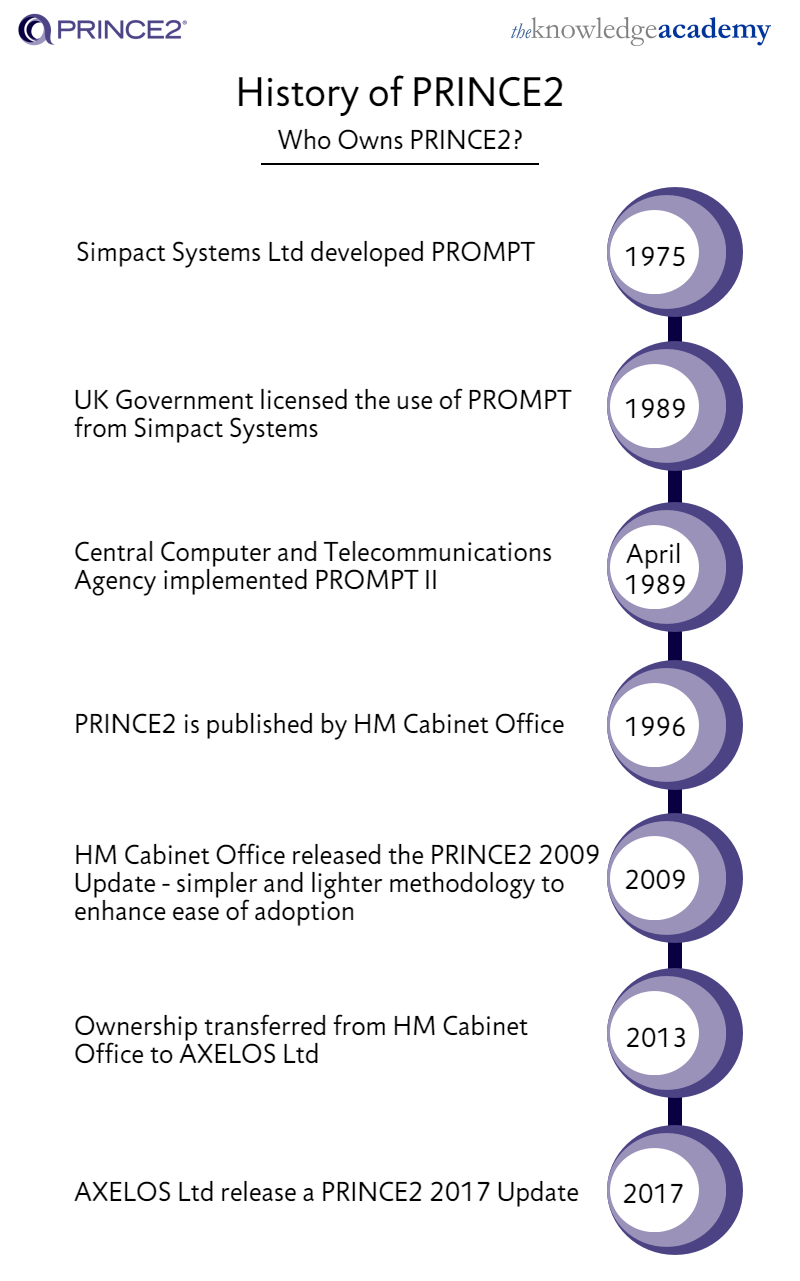