​ The operate and optimise stages are highlighted to show how they can be the final two stages if the network is at the optimal performance level during the tests, when it is used as a normal network during day-to-day tasks. If no major faults are detected during the optimise stage and the network meets expectations, then the changes will be implemented permanently as an update to the system. If it doesn’t meet standards, then it will be redesigned and more preparations will be made, beginning the cycle again. 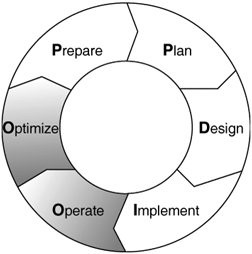