Research Reveals Number of Women in STEM is on the Rise

Blog
We sought to find out which tech and science degrees are the most sought after by women in the UK, looking at figures from HESA (Higher Education Statistics Agency).
Blog
Blog
The Knowledge Academy submitted FOI requests to councils across the country, to discover whether or not the issue of unauthorised school absences is on the rise.
Blog
How can you get into digital marketing? Is a digital marketing degree necessary? We explain how you can start a in a career in this exciting industry.

Many amazing women have changed the course of history with their intelligence and passion for technology and science. Whether we are talking about well-known historical figures such as Rosalind Franklin and Marie Curie, or lesser-known contemporary names like Cori Bargmann (the American neurobiologist who leads the Laboratory of Neural Circuits and Behavior at Rockefeller University), the undeniable work of these individuals has helped to build the world we know today.

With that in mind, theknowledgeacademy.com sought to find out which tech and science degrees are the most sought after by women in the UK, looking at figures from HESA, the Higher Education Statistics Agency. We also compared figures from 2017/18 to 2018/19 to find out if there has been an increase or decrease in women taking courses in tech and science. 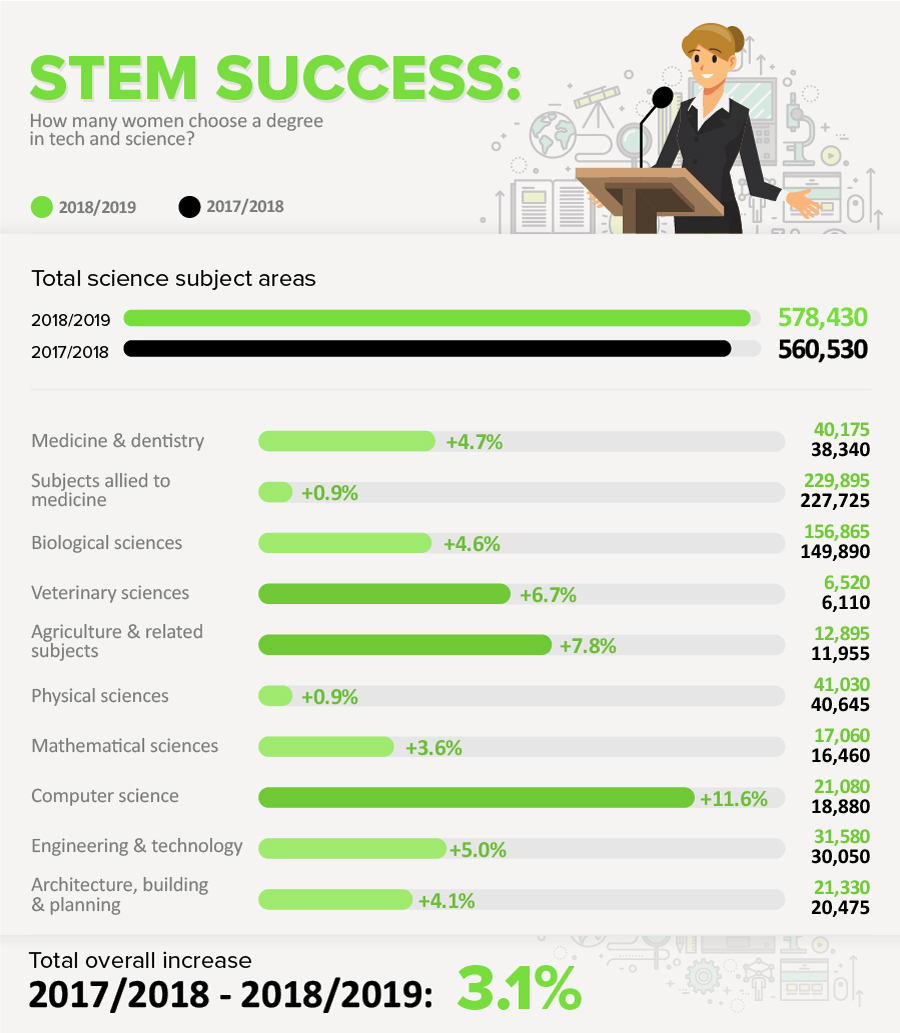 While STEM is still a male dominated industry, figures show a 3.1% increase in women enrolling in a degree in tech and science subjects from 2017/18 to 2018/19 in the UK. We also make these observations:

The preferred courses for women are subjects allied to medicine

According to HESA, this includes the following subjects:

While medicine is the most studied course type, subjects it is allied to saw the smallest increase in students over a year (0.9%). The same goes for physical sciences, where there was also an increase of 0.9%.

Veterinary sciences had a big spike of female students (6.7% increase)

While veterinary sciences have the fewest number of female students, there has been a significant increase from 2017/18.

Computer sciences have the highest spike in undergraduate female students

When it comes to the tech and science degree which has seen the highest spike in undergraduate female students, computer sciences top the list, at 11.6%. This is followed by agriculture and related subjects, with a 7.7% increase.

Theknowledgeacademy.com also sought to find out how many women are in science and tech jobs in the UK, compared to the rest of Europe.

Looking at figures from Eurostat, we found that out of the total percentage of people in science and tech jobs in the EU, 41% of them are women. In the UK, this number is 40.7%, just below the average.