We may not have the course you’re looking for. If you enquire or give us a call on +61 1-800-150644 and speak to our training experts, we may still be able to help with your training requirements.

People know the capital cities of these countries the least

People know the capital cities of these countries the least 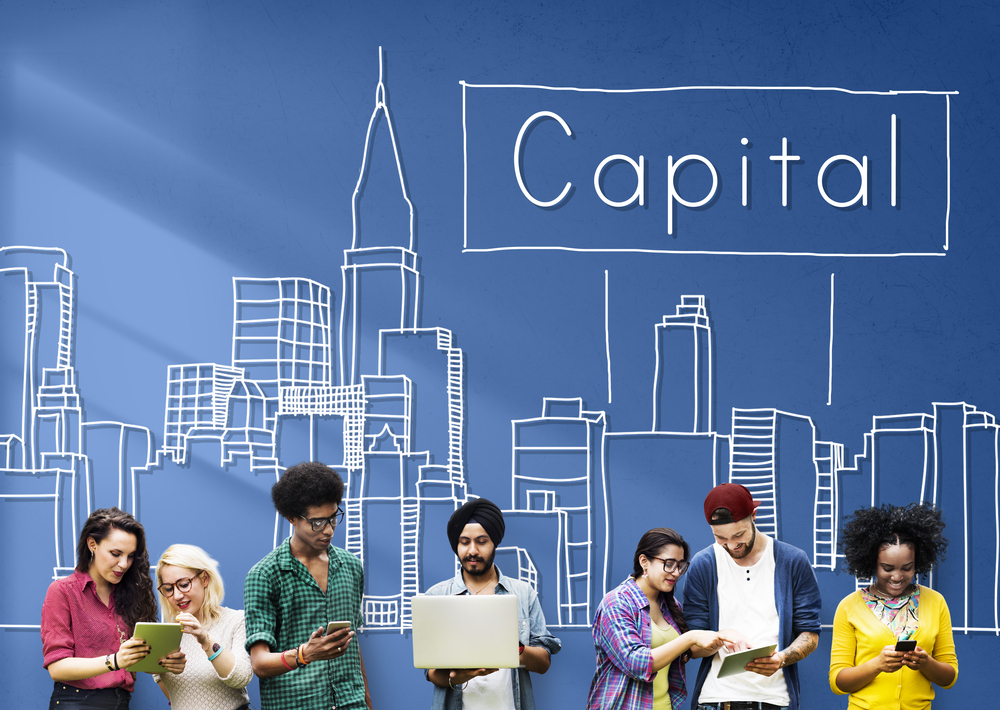 Whether it is sitting in a pub quiz, watching a TV game show or playing a board game, the question “what is the capital city of…” can either bring delight or dread to the faces of quizzers.

From Ouaguadougou to Ottawa, Paris to Pyongyang, we all have a varied knowledge of world capital cities.

But what happens if you don’t know the capital city? More than likely, you will use our good old friend Google to find out.

With this in mind, The Knowledge Academy set out to find which world capital cities, from the wealthiest nations, people know the least.

Firstly, using Ahrefs, we collected data on how many times the capital city was searched for, for each country in the world. We then took GDP data from the World Bank, to filter out the 20 wealthiest countries in the world that people do not know the capital cities for.

Which capital cities are least known for popular holiday destinations? 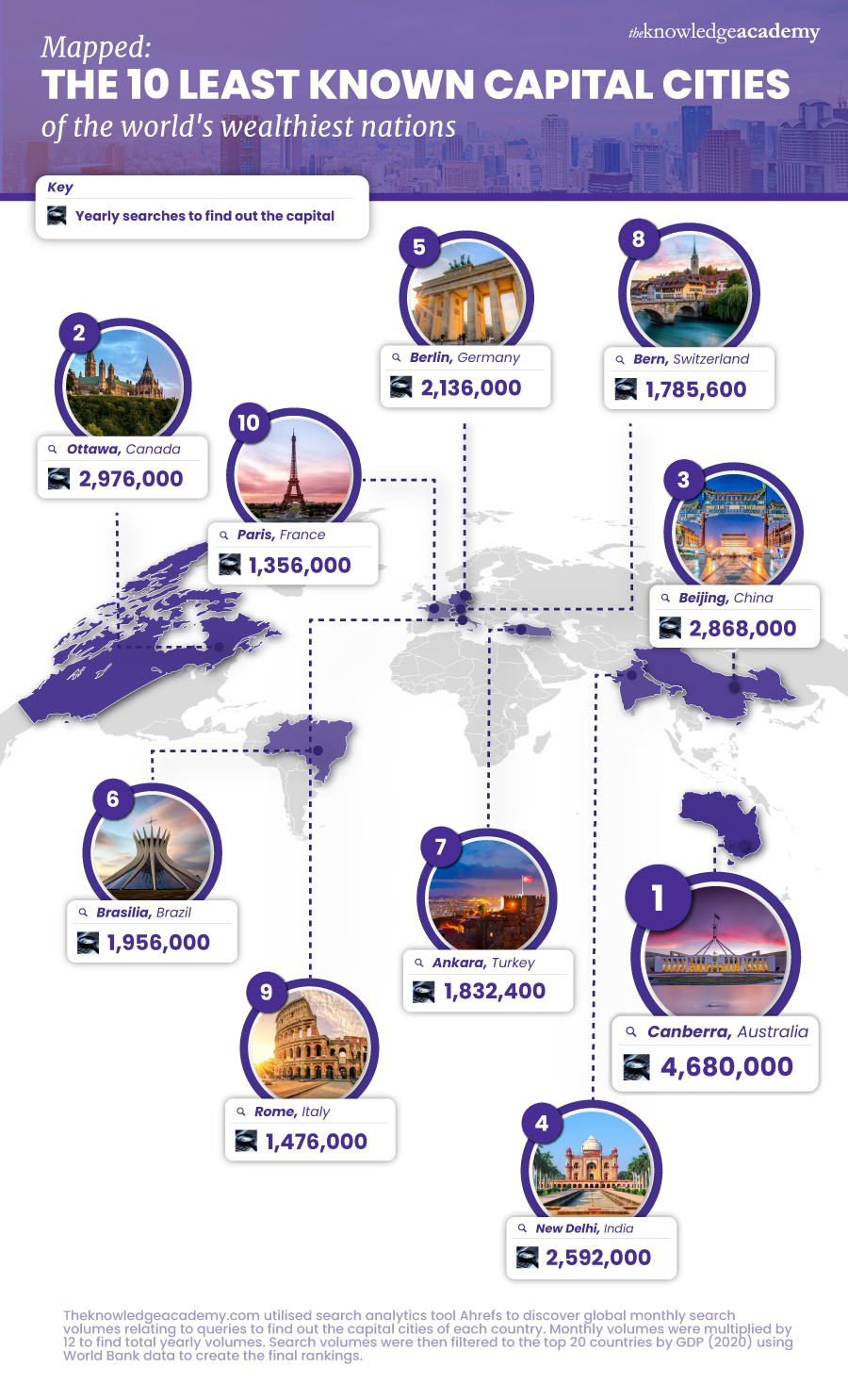 Sitting on top of the pile, by a country mile, is Australia. Despite only being the thirteenth wealthiest country in the world, more people search for the capital of Australia than any other.

As Australia’s eighth most populated city, it is little wonder that 4.7 million people a year do not know Canberra to be the capital city, probably opting for the more populated Sydney, Melbourne or Brisbane.

So why is Canberra the capital, if it is not the most populated?

The Australian constitution of 1901 stated that parliament must be situated at least 100 miles from Sydney. As a compromise to the people of Melbourne, who also wanted it to be the capital, Canberra was chosen. Situated in between Sydney and Melbourne, Canberra is thought to derive from the Aboriginal word for ‘meeting place’.

There certainly seems to be a similar theme between our top two countries.

We have to go back as far as 1857, when Canada’s capital city was up for grabs. There were a few notable contenders. But, in this instance, it was Queen Victoria who settled the debate. She opted for Ottawa, as it was centrally placed between the larger cities of Montreal and Toronto, and along the border of Ontario and Quebec - the centre of Canada at that time. It was also far enough from the USA border, making it safer from possible attacks.

China completes the top three, with 2.8 million people per year seeking to find the capital, Beijing. Having hosted the 2008 Summer Olympics and the 2022 Winter Olympics, this city has been an important strategic and political location for over 700 years.

In fourth place is India. 2.5 million people a year search for its capital city; New Delhi. This was established as the capital of India in 1931. After it moved from Calcutta to Delhi in 1911, the rulers decided to build a brand new city from scratch, hence the birth of New Delhi.

Germany, in fifth place, is the highest European representative, with 2.1 million people per year looking for its capital city, Berlin. Germany, which became a nation state in 1871, has had a turbulent history. Berlin has prevailed as the capital city for much of this time, apart from the Cold War, when Berlin, and the rest of Germany, was divided by the Berlin Wall. Bonn became the capital of West Germany and East Berlin the capital of East Germany. After the fall of the Berlin Wall in 1989, Germany was reunified once again and Berlin restored as the capital.

Brazil, the only South American country in our study, is in sixth position. Just under two million people per year search for its capital city, Brasilia. Rio De Janeiro was the original colonial capital of Brazil, but this became Brasilia in 1960, after the government decided Rio was becoming too crowded and congested.

1.8 million people per year search for the capital city of Turkey, in seventh place. A year after the fall of the Ottoman Empire in 1922, Ankara officially became the capital of Turkey, replacing the much established Istanbul.

The remaining countries in the top 10 are all occupied by European nations, with Switzerland, Italy and France taking the respective remaining places. 1.7 million people per year search for Switzerland’s capital (Bern), with 1.4 million for Italy’s Rome and 1.3 million for France’s Paris.

Which capital cities are most known?

Notably at the other end of the scale, in twentieth place, is the United Kingdom, with 192,000 people a year searching for its capital city, London. Given its vast array of iconic landmarks, and rich historical links in terms of politics and royalty, it is perhaps unsurprising that this capital city is the least searched for in our top 20.

Pre-Covid, London was the third most visited city in the world, narrowly behind Paris, and it is easy to see why, given its status as one of the world’s greatest cosmopolitan cities and its rich tapestry of culture.

The USA is in nineteenth position, with just over a quarter million searches for its capital city, Washington DC. Since the U.S. Congress was established by the Constitution in 1789, Washington DC has been designated the permanent capital city of the USA - despite only being the twentieth most populated city in the country.

Learning world capital cities goes beyond being able to recite them in a quiz. Not only does it improve your memory, it also provides an opportunity to learn how capital cities have often changed hands over time. It also opens up a world of possibilities for travel, exploration and learning about new places, cultures and people. It may even lead to a future career in the travel industry, so why not check out our travel agent masterclass course to allow that dream to become a reality…

1. The Knowledge Academy endeavoured to find out which capital cities people knew the least.

2. A seed list of 195 countries was collated from Worldometer, which includes the 193 UN member states and the UN observer states of Palestine and the Holy See.

5. GDP figures from the most recent year were then acquired from The World Bank.

6. The list was filtered down to include only the top 20 countries by GDP.

7. Search volumes to find out the capitals were then ranked.